In our April 26, 2012 blog, we shared brazing test results from varying joint clearances and the resulting joint quality.  Today, we will share results from additional tests that examine the impact of copper-to-aluminum orientation (i.e. Cu inner tube to Al outer tube, or Al inner tube to Cu outer tube) on resulting joint quality and strength.  We will also study the impact of using predetermined alloy volume (i.e. rings) during the joining process and the effects on joint quality.  Metallurgical analysis of test specimens will show the braze/solder quality achieved for each family of joints.

Testing Procedure and Results
The commercially available alloys 88Al/12Si, 78Zn/22Al, and 98Zn/2Al are commonly used for production or repair.  These alloy families are available in different forms from manufacturers, but flux-containing wire and rings are often selected because they control the amount of flux and alloy applied to the joint interface.  This combination of alloy and flux improves the quality of the joint and limits waste plus process time.  Note that these alloys can be applied during heating or pre-placed in the joint area prior to brazing, in ring form.

In addition to the three variations of filler metal used in the study, the joint design was based on expanded-cup design, with the addition of a small flare to the end of the expanded cup.  This added flare allowed the use of a preformed ring and aided hand feeding of the alloy in the study.

The joint design with the cup and flare is shown in Figure 1 for both copper and aluminum base metals.

The ability to use either the copper or the aluminum base material as the outer member of the tube assembly provided the ability to assess if the orientation of the copper and aluminum base metal had an effect on the joint strength and quality.  Joint clearances during the previous study determined that a radial clearance range of 0.08-0.15mm (0.003-0.006in) is preferred to achieve optimal joint quality and strength.
Figure 1.  Specimens used during tensile testing

Test specimens for both hand-fed and preformed alloy placement and base-metal orientation were manufactured in both clearances ranges, based on that data.

Note:  Currently, the 98Zn/2Al alloy is not available as a preformed ring. 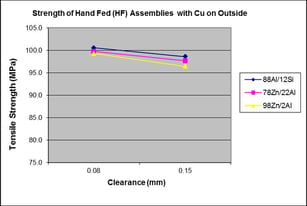 After joining, five tube-to-tube specimens for each set of test conditions were tested in tension by a universal 60K load-tensile tester.  The brazed assemblies were pulled until failure; failure for all sets occurred in the aluminum base metal.
Figure 2.  Effect of alloy on average assembly strength (Cu on outside)

Data was compiled from the tests performed on assemblies with joint clearances of 0.08mm (0.003in) and 0.15mm (0.006in) for different alloy types, application form, and composition of alloy, as well as joint orientations.  Assessments of the average tensile strength values obtained for all sets of specimens tested are plotted in Figures 2-9 and are discussed below.

Figure 3.  Effect of alloy on average assembly strength (Al on outside)

See the comparison of the average tensile strengths of assemblies joined by hand feeding the three alloys evaluated into the joint interface in Figures 2 and 3.   Figure 2 shows that the results for hand-fed joints where the copper orientation is on the outside are similar for all alloys tested.  Lower-resulting assembly strength was seen with the 0.15mm (0.006in) clearances.  Some inconsistency in strength did occur with assemblies where aluminum was the outer tube as shown in Figure 3.  This is most clearly illustrated with assemblies made with hand feeding of 88Al/12Si. This difference is probably due to an increased difficulty in process control with the higher-melting-temperature alloy, and when aluminum was placed on the outside. 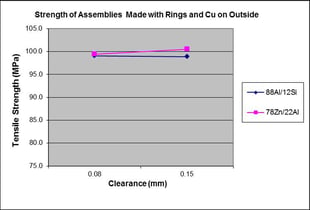 Figure 4.  Effect of alloy on average assembly strength made with rings (Cu on outside) 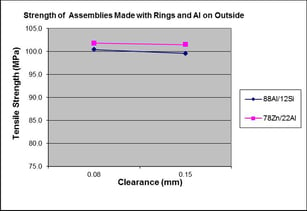 Figure 5.  Effect of alloy on average assembly strength made with rings (Al on outside)

Figures 6-9 illustrate the difference in consistency between joints/assemblies made by hand feeding the brazing alloy into the joint versus pre-placing the alloy (in ring form) adjacent to the joint interface prior to heating.  Only the 88Al/12Si and 78Zn/22Al alloys were tested in ring form, due to the incompatibility of the 98Zn/2Al and its appropriate flux in ring form.  The specimens brazed using preformed rings with the copper orientation on the exterior (Figures 6 and 8) exhibited 0% failures near the braze cup or fillet.  Assemblies that had the aluminum base metal on the exterior (Figures 7 and 9) exhibited a higher failure rate at the cup (between 0 and 40%) but lower than that observed for hand-fed specimens.  During joining of these assemblies, we observed more consistent processing (heating pattern and time) with rings.  The improvement in process control can be seen by the more stable assembly strengths that resulted as plotted below.

Figure 6.  Effect of alloy application on assembly strength for 88Al/12Si assemblies (Cu on outside)

Figure 7.  Effect of alloy application on assembly strength for 88Al/12Si assemblies (Al on outside)

In general, the results showed that the most consistent tensile strengths were achieved when pre-placed alloy was employed.  When pre-placed alloy was not used, the lower-melting-temperature Zn alloys did produce more consistent strength values.  This reflects the impact that higher heating temperature can have on process consistency.  Note, however, that none of the assemblies joined with all three alloys failed in the braze joint.  This indicates that, with proper joint design and brazing/soldering processing, the weak point of a copper-to-aluminum transition joint will still be the aluminum base material, not the joint itself. 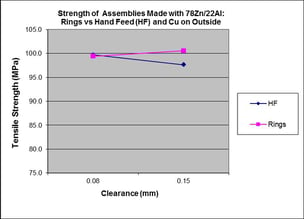 Figure 8.  Effect of alloy application on assembly strength for 78Zn/22Al assemblies (Cu on the outside) 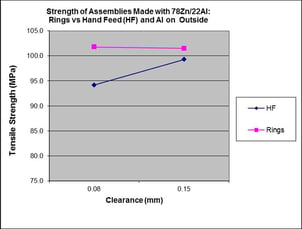 Figure 9.  Effect of alloy application on assembly strength for 78Zn/22Al assemblies (Al on outside)

Joint Quality Comparisons
Cross-sections from one of the six tensile specimens brazed in the various test conditions were prepared for metallurgical examination.  We observed the resulting joint quality for the different alloy, form, joint configuration, and clearance.  General observations follow.

In summary, hand-fed results with new joint design were similar to the first study, in terms of tensile strength and joint quality.  Preformed rings delivered more consistent tensile values than hand-fed alloy, plus lower erosion of the base metal.  Complete penetration was achieved 88% with rings vs. 54% with hand-fed alloy.  The tensile break location was 90+% in the aluminum base metal outside of the joint.

For copper sockets vs. aluminum sockets, we note these conclusions:

Conclusions
In conclusion, Lucas-Milhaupt tests showed that preformed rings provide a more consistent joint than hand-fed alloy, with respect to tensile strength and joint quality.  No adverse effects were noted from joint design change, especially the shorter shear length.  Also, copper sockets (on the exterior) produced the best and most consistent joint strength and quality.  Finally, 88Al/12Si produced the least spherical and shrinkage porosity, given proper heat control, and we found 98Zn/2Al to be a good alternative for hand-fed operations.

Other resources:  See the Lucas-Milhaupt videos on Brazing Copper to Aluminum and Handy One Aluminum Brazing Rings.