Posted by Lucas-Milhaupt Brazing Experts on May 30, 2013

When it comes to safely brazing with oxy-acetylene torches, let's look at two important aspects: safety equipment, plus procedures for safe operation. 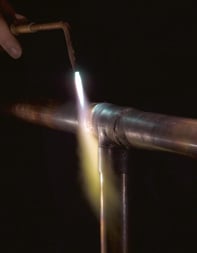 This is serious business:  arc rays and sparks can result in loss of sight, fume inhalation can lead to lung damage, and other accidents can cause burns, fires, or explosions. See American National Standards Z49.1, Safety in Welding, Cutting, and Allied Processes OSHA Safety and Health Standards, available from the U.S. Government Printing Office, Washington, DC 20402.

Cylinders - Oxygen and acetylene are kept in separate cylinders and not combined until the torch tip is ignited.  Oxygen cylinders, typically painted green, contain oxygen compressed up to 2,200 psi (pounds per square inch).  Oxygen is a stable compound by nature, but any oil or grease which comes in contact with the oxygen will burst into flames.  Therefore, keep hands and gloves free of these materials before handling cylinders.

Acetylene gas cylinders are compressed at only about 250 psi, which is much lower than oxygen tanks.  However, unlike oxygen, acetylene is rather unstable and, therefore, should not be introduced into the torch above 15 psi.  As an extra precaution, cylinder valves should be open no more than 1.5 turns, in the event an operator must close a valve quickly.

Flashback Arrestors - Flashback arrestors prevent fire from flowing back into the cylinders, which will otherwise lead to an explosion.  Flashback arrestors contain cut-off valves with low melting points.  When triggered by flame, they readily shut off the gas supply and thus extinguish the flame.  Both check valves and flashback arrestors should be tested or changed regularly to ensure they are working properly.

Safe Operation
In addition to using safety equipment, workers should practice safe operation to prevent flashbacks.  Keep acetylene and oxygen separate until the torch is ignited.  When starting a torch, the acetylene valve should be opened first.  Next, the torch should be ignited, and then oxygen can be introduced.  Please note that opening both gas valves prior to ignition can cause gas backflow into either gas hose, leaving the system vulnerable to flashback.

After use, it is critical that both gas lines be emptied separately-one at a time-through the torch.  If this "bleeding" of gas lines is done simultaneously for oxygen and acetylene, any pressure difference between the gas lines will cause backflow of one gas into the other line, so this should be avoided.

Flashbacks can also be caused by brazing with multiple torches, simultaneously, on one part.  If using dual torches to heat both sides of a part, do not aim the torches at each other, but rather, angle each torch toward the part.  If one torch should cause flashback in the other, operators will hear a loud hissing sound and should immediately turn off the gas by closing first the acetylene valve and then the oxygen valve.

Conclusion
The oxy-acetylene torch system is an important tool, used commonly in the brazing industry.  Ensure that all operators are using safety equipment and practicing safe operation as described in today's posting.  This is imperative to prevent potentially deadly explosions and to maintain a safe workplace environment.  Let's be careful out there!

See our website for more information on proper brazing procedures.  Don't hesitate to contact Lucas-Milhaupt if we can be of further assistance, or if you need help with brazing products or related services.