The exception is a class of alloys called eutectics. Although these are not pure metals, they do have a single melting point, because the melting point, or solidus, and flow point, or liquidus, are identical. For example, Lucas-Milhaupt Silvaloy 720/721 melts and flows at 1435°F (780°C). 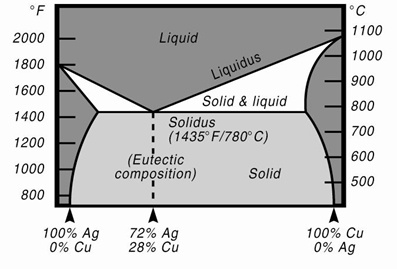 Brazing Considerations
Figure 1 is a phase diagram for the silver-copper binary system. Note that, at the 72% silver, 28% copper composition, liquidus and solidus temperatures are the same. The alloys to the left or right of this eutectic composition do not change directly from solid to liquid, but pass through a "mushy" range where the alloy is a combination of solid and liquid.

The temperature between solidus and liquidus is the melting range. As the temperature increases from solidus state moving toward liquidus state, melting and flow increase. The resulting sluggish flow can present challenges to capillarity when brazing joints.

Filler metals that have wide melting ranges, some separation of the solid and liquid phases may occur. This is termed liquation: a partial melt of the lower ingredients in the filler metal, which in turn leaves a shell of the higher-melting material, called a skull. See Figure 2.

Liquation normally occurs during slow heating through the melting range of an alloy. Liquation may affect the integrity of a braze joint by potentially causing voids or a lack of adherence to base materials. See Figure 3. 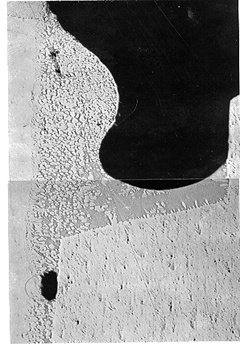 In brazing, the base metal on a component should never be melted. Therefore, it is important to select a filler metal whose liquidus temperature is lower than the solidus temperature of both the base metals being joined. Several other factors should be considered prior to brazing-examples are listed as follows.

4.       Assemblies that must be heat treated: (Option 1) heat treat and then braze-selecting a filler metal whose liquidus temperature is lower than the heat-treating temperature so the hardness will not be adversely affected by brazing, or (Option 2) heat treat and braze simultaneously-using a filler metal with a liquidus temperature closely equivalent to the heat-treating temperatures. Due to the complex nature of heat treat conditions of various base materials contact Lucas Milhaupt Technical Services for detailed information regarding your specific application.

Lucas-Milhaupt is dedicated to providing expert information for Better Brazing. Please feel free to share this blog posting with associates. See Lucas-Milhaupt complete line of braze filler metals for your operation, and contact us if we may be of assistance.